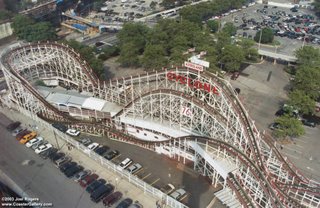 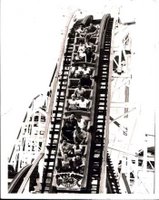 In the period since it first opened on June 26, 1927, the Cyclone has emerged as the outdoor amusement industry's most famous, most influential, and most copied individual ride.
Brothers Jack and Irving Rosenthal commissioned Vernan Keenan to design, and Harry C. Baker to construct, a monumental wooden-tracked twister, which was forced to be exceptionally tight and steep because of the small ground space that was available to them. Construction then began on a site historically significant in the world of roller coasters -- the Cyclone occupies the space, which contained the world's very first roller coaster, LaMarcus A. Thompson's Switchback Railway, as well as the world's first successful looping roller coaster, Loop The Loop. With power supplied by the Eisenberg Brothers of Brooklyn, signs from Menheimer and Weiss of New York City, steel from the National Bridge Company, also of New York City, and lumber from Cross, Austin & Ireland, located in Long Island City, the Cyclone quickly became Coney Island's number one attraction, a status it maintains to this day.

When the Rosenthal Brothers left Coney Island to operate their newest property, Palisade Amusement Park, they turned over the operation of the Cyclone to Chris Feuchts, who lovingly maintained and ran the ride for decades. Eventually, ownership of Cyclone was acquired by the City of New York, and it was operated by the City's Parks Department.
On June 18, 1975, Dewey and Jerome Albert, owners of Astroland Park, received authorization to operate the Cyclone under a leasing agreement with New York City. The Alberts had teams of carpenters and iron workers completely rehabilitate the ride, which reopened to great fanfare on July 1st of that year. Since that time, Astroland Park has invested millions of dollars in the upkeep of the Cyclone -- today, it probably runs better than it did on the day it opened, and has the highest safety standards in the outdoor amusement industry.

The Cyclone has consistently ranked at or near the top of every roller coaster top ten list published. It has been proclaimed the world's greatest by a broad spectrum of media institutions and roller coaster aficionados. Time Magazine quoted Charles Lindbergh as saying that a ride on the Cyclone was more thrilling than his historic first solo flight across the Atlantic Ocean. Emilio Franco, a mute since birth, regained his voice on the Cyclone, uttering his first words ever -- "I feel sick"! In April 2001, singer Nikki Lauren became the first person ever to present a live musical performance in the Cyclone's historic loading station.
An official New York City Landmark since July 12, 1988, Cyclone was listed in the New York State Register of Historic Places on June 31, 1991. National Historic Landmark status followed, on June 26, 1991. On April 14, 1992, Brooklyn Borough President Howard Golden issued a citation to Jerome Albert and the late Dewey Albert for their operation of both Astroland and the Cyclone, saluting them for being the primary energizing force in the regeneration of the Coney Island Amusement District.

NYHG is a non commercial website! It was not created to earn money, it has been started in October 2006 to save data, to share informations and to explore the past of NYC. You should find no commercial interruptions or advertising while exploring this weblog. Running the blog is only a hobby to escape from working days reality.

This is a blog with priority on visualization. You should not watch the postings on a smartphone or some other tiny display equipment.
Please join the blog on a 19 Inch monitor or comparable equipment, the larger, the better.
Thanks! 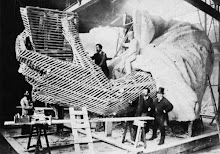 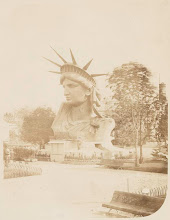